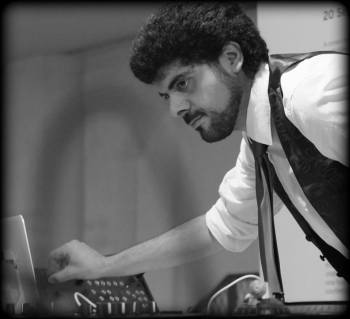 My name is Efthymios (aka Tim) Chatzigiannis and I am a Greek composer/sound artist based in Oxford. I got involved with music at a very early age and throughout my career I have studied, and performed, various genres and styles. At the age of 6  I began studying classical piano at the Municipal Conservatory of Ioánnina. At 13 I took up the electric guitar and started my studies at the Conservatory Fillipos Nakas focusing mainly in rock, blues and jazz, and  started performing regularly with various rock/blues bands.

In 2005 I completed a BA program in Music at the Anglia Ruskin University in Cambridge. In 2007 I completed an MA in the Interdisciplinary Arts and Practices specializing in Composition and Sonic Art at  Oxford Brookes University, where I also completed a PhD study entitled: Aural Evolutions: Intersections of Sound with the Physical Space. This study focuses on the creative possibilities of acoustic phenomena, and the meeting points of sound with the physical dimension.

I am producing sound installations and compositions that explore the phenomenology of sound, and exploit physics in order to manipulate sound. I create audio/visual sculptures that deal with particular aspects of the physics of sound. Subtle, almost imperceptible phenomena are amplified and brought forth in order to explore the way sound interacts with the environment that surrounds it, but also the way that our perception of this environment is shaped by the alterations in the sound.

I am also active in the composition and performance of electronic music and my main research interests are data sonification, real-time digital audio processing, programming new audio/visual performance interfaces, and composing for film and various digital media. I regularly employ music technology and real-time audio manipulation in improvisations, live concerts, and in the studio using various DAW's and plug-ins. My work has been performed and exhibited in the UK, Greece, Holland, Germany and Brazil.